Just completed the second of the 25 minute runs in the #Couch25k plan. Ankles, knees and hips hurt! Maybe because I was running on London roads, unlike the last 25 minute run on springy meadow and lanes in Derbyshire. But I completed it and felt v good.

Admittedly, I ran mostly on the flat and I realised how slowly I was running when I was overtaken a few times. Misjudged the temperature too; should have worn a pair of those skimpy lycra shorts and tops. Two ladies who ran past me were sporting lycra. But I don’t feel brave enough at present to reveal my pale legs and ribby midriff.

I signed up for a ‘competitive’ 5K. Charlie’s Run at Chasewater Park on Sunday 27 September. It’s a Fun Run, but I am taking it very seriously. Organised by a family who do a lot of fundraising for PKD. The last fun run I did in 2012 was a shock; felt knackered and nearly had to use another runner’s inhaler.

In addition to the running, I’m doing a lot of weights and ‘core’ exercises at the local gym. Treated myself to a series of sessions with a likeable personal trainer who is a part-time actress and writer. Was in Harry Potter but she told me she spent all her earnings.

Nipped up the RF for a Dexa Scan of hips and spine. Fingers crossed there’s no bone decay. I see a fab renal bone doctor twice a year. She ensures my vitamin D is at the right level and monitors me for mineral & bone disorder. Phosphate was up a bit at last blood test – although I blame that on eating too much yoghurt with bran sticks. Paradoxically, I was eating the bran/yoghurt to correct a GI issue!

I have a touch of osteopenia however and for nearly 15 years, I’ve taken Fosamax. This was prescribed after getting a leg stress fracture following a charity 5k run. I recall the irony and the amusement in A&E.

For the next 3 weeks, I will up my running to be on fine form on the 27th!

by doxi time to read: 1 min 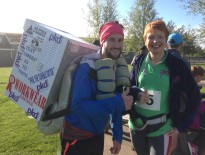